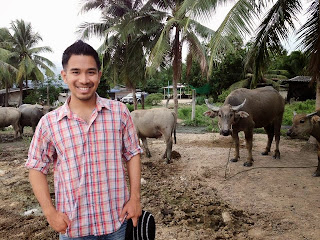 Me standing in front of some cute water buffaloes which are locally known as "faai"
This entry is a part of my 2013 Thailand and Laos summer trip.

Based on my observations, the merge is more prevalent among people in my parents' generation (ages 40-50) and older. Due to our better access to education, people in my generation regularly maintain the distinction. The only time people my age (and perhaps in my circle) merge these seconds is when we do it jokingly. (I suppose this is analogous to how young New Yorkers may say "thirty-third" as toity-toid to mock the speech of older generations, or how young Americans may jokingly say "what, which, whip, where, why" with the /ʍ/ sound, the voiceless labiovelar fricative (for non-linguists, it sounds like there is an emphasis on the h in wh: hhw).)

How did k(h)w become f? (Linguistic explanations)
De-velarization and spirantization of stops may have motivated the merge.
(hypothesis 1)
To account for how khw and kw became f, one may propose that khw and k simply underwent the processes of de-velarization and spirantization. In particular, khw and kw lost its velar-ity whereby both became pv which thereafter became fv due to the process of spirantization, and finally fv became f due to the fact that Thai disallows v sound.
(hypothesis 2)
An alternative explanation might be that khw and kw first both merged into khw. The khw sound, being a sound which often gets pronounced as xw (it is a known fact that kh and x are pronounced interchangeably in Thai), thence underwent the process of de-velarization-- fv --which thereafter became f since Thai disallows v sound.

Why did k(h)w become f?
As with any diachronic alternation in sounds in languages around the world, one explanation might be that people in one generation did not correctly perceive the sounds produced by an older generation. Perhaps at one point Siamese speakers failed to hear the velar-ity of the khw and the kw, and all they perceived was the labial-ity (from w) and the supposed frication, thus leading them to hear khw and kw as f, and thereafter they commenced to produce khw, kw, and f in an identical way.

Hypercorrection
When I was visiting Thailand this summer (2013), I came across a person in Chonburi province who was apparently unaware that she had hypercorrected her speech. Although I indeed heard many people there merging khw, khw, and f sounds, I also heard an elderly woman utter ฝาก (faak) as ขวาก (khwaak). I was utterly surprised by this because I had never heard anyone do this.

Corresponding sounds in other Tai languages
The distinction seems to be maintained in other Tai languages including Northern Thai, Shan, and Lao. Interestingly, in Lao the khw and kw seem to induce vowel shortening. For example, khwaa "right" and kwaang "deer" are pronounced as khua and kuang respectively.
Posted by Alif Silpachai at 4:04 AM No comments: 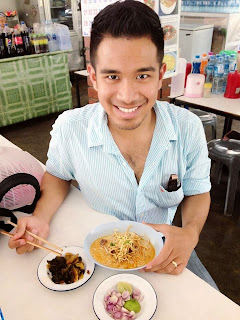 This entry is a part of my Thailand and Laos summer trip in 2013.

Chiangmai, Northern Thailand was amazing. It took me about 12 hours to ride a first-class bus from Chonburi province (not too far from Bangkok) to the northern province. The ride costed me about ฿700 (about $22).

The bus made me feel as if I were on an airplane. There was a bus stewardess who was beautifully dressed up like a flight attendant. The seats remarkably resembled those from an airplane. Meals were provided.

Their songtaews, red in color, function differently from those from Bangkok and nearby provinces. In Bangkok, songtaews run on their designated streets--they function like buses wherein one must know which line to take in order to go wherever he/she wants. In Chiangmai, however, songtaews are practically similar to taxis. In particular, passengers have to inform the drivers of their destinations. Their songtaews can be ridden in two ways: sharing the service with other passengers or have the whole songtaew all by yourself. The latter choice is more expensive than the former.

Speaking Northern Thai is very useful. The first and the most important thing which I learned from riding my first Northern Thai songtaew was that if one does not speak the local language, he/she will likely be charged with a non-local price. My first ride costed me ฿40 (about $1.25), which I was informed thereafter that I had been severely ripped off. Before riding a songtaew for the second time, I made sure that I would be charged with the local price--฿20 (about $0.62). (Bear in mind that price varies according to the distance as well) Yes, I am quite aware that I seem very cheap right now, but it always comforts me more the idea of NOT getting ripped off than the idea of paying the cheapest price possible ($1.25 is cheap for Americans; it costs $1.50 in Los Angeles to ride buses).

There are at least two ways in which one can receive the local price: speak Northern Thai with no foreign accent (not even a Standard Thai accent), or directly request for a local price. Alas the former is not an easy option; so, I suggest the latter. I personally would always choose the latter, for fear that they notice my non-native-like Northern Thai pronunciation. Here is how my mother would do it: she would do it dramatically (I really admire her for possessing such ability):

songtaew: (in Northern Thai) where to ma'am?

my mother: (in Standard Thai) to Night Bazaar, please. How much will that be?

songtaew: (switches to Standard Thai) All right ma'am. That will be ฿40. That alright with you?

my mother: (looks at the driver incredulously and raises her right hand to her forehead abruptly, both eyes widely open as if she has never been this surprised before in her entire life) Huuh..Wh-what?! I thought it was only ฿20! OMG how could this be?! Impossible! (raises the amplitude in her voice a little more) Has the price changed?! This is extremely bizarre!!! All other songtaews I've been on have only charged me ฿20! Does yours come with a special service?! I just---

my mother: Oh ok (gets on the songtaew).

If you are not as brave as my mother, I suggest you only ask them this: "excuse me, sir/ma'am, I thought it was only ฿20. Why does yours cost ฿20 more than the others?" And hopefully this will suffice.

People here natively speak Northern Thai, or Kam Mueang, which is another Tai language with which up until now I have been obsessed. Northern Thai is euphonious.Their six tonal system (cf. five tonal system in Standard Thai) is utterly pleasant to my ears. It was a great opportunity for me to practice my Northern Thai.


Here are some of the purchased books from there: 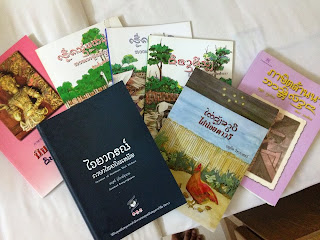 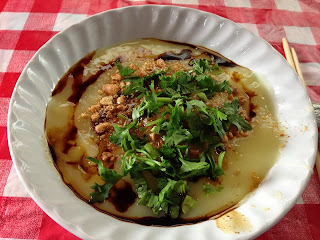 I had a chance to try Shan khao feun (tho phu) for the first time! Super delicious! 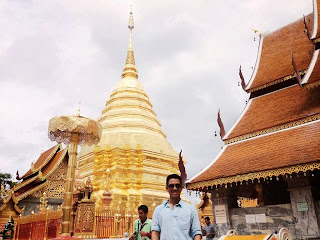 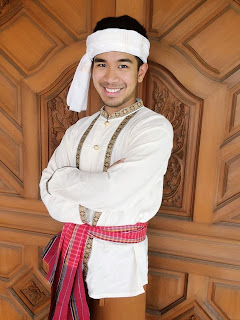 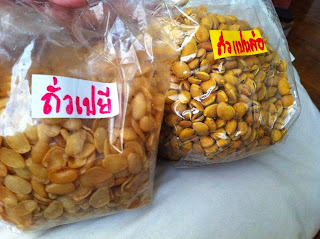 I had an opportunity to try some exotic beans/nuts. The left ones are good. 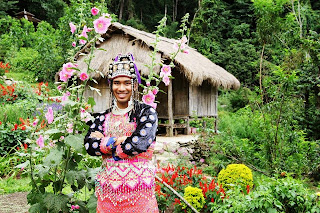 Me clad in a Hmong outfit on Doi Pui (Pui Hill), Hmong village.

Posted by Alif Silpachai at 2:46 AM 3 comments: